Never have the T’au been so close to extinction. Your homeworlds are surrounded. The Swarm, the machines, the barbaric humans. To ensure the survival of the T’au, The Fourth Expansion was launched to claim rich new worlds. Yet the warp swallowed the T’au. Your ship emerged alone near a war-ravaged, alien planet. This was not the paradise promised. But you will conquer it. For the T’au, for the Greater Good.

After the Chaos Space Marines and Tyranids DLCs, a new faction joins the fight for the domination of Gladius Prime. Driven by a constant ambition to expand and spread the word of the Greater Good across the Galaxy, they will seek to assimilate or eliminate all the other opposition races on the planet.

With 31 new units, the T’au can deploy an impressive and lethal army. Between swarms of drones and powerful battlesuits, the T’au player will never have a shortage of tactical options. The T’au warfare doctrine has been carefully represented in Gladius. Their army is a ranged-based force relying on superior technology and devastating firepower. Through subversion, propaganda and assimilation of the indigenous lifeforms, they can find new allies and completely disrupt the enemy morale, paving the way for planetary conquest.

The T’au DLC for Warhammer 40,000: Gladius will be released on February 25th.

One of the most powerful weapons of the T’au is their ability to seek new allies. They can spend influence to convert certain neutral units like Kroot Hounds and the brand new Vespid Stingwing to their cause.

For the Greater Good

The core philosophical concept at the heart of the T’au. Demoralize your opponents and destroy their units’ morale by spending influence. Proselytize and immediately gain population in your cities.

Turn your enemies’ servants against their masters. Through precise use of propaganda, you will be able to cripple the loyalty of enemy cities.

A T’au Battlesuit is an advanced powered combat exoskeleton that forms an integral part of the T’au Fire Caste’s military forces. Customize them by upgrading with advanced support systems.

Deploy many different designs of drones, miracles of T’au technology that provide offensive, defensive and tactical support. Make use of Markerlights to maximize your firepower.

Warhammer 40,000: Gladius – the base game features four factions. The steadfast Astra Militarum, the mighty Space Marines, the green tide of the Orks and the ancient army of the Necrons.

Warhammer 40,000: Gladius – Tyranids DLC. The Tyranids will eat the world – literally. This alien race knows no mercy, driven by an endless voracious appetite.

Warhammer 40,000: Gladius – Chaos Space Marines. Once part of the elite warriors of the humans, these talented fighters have been warped by the Chaos Gods.

Games Workshop® Group PLC (LSE:GAW.L), based in Nottingham, UK, produces the best fantasy miniatures in the world. Games Workshop designs, manufactures, retails, and distributes its range of Warhammer®: Age of Sigmar® and Warhammer® 40,000® games, miniature soldiers, novels and model kits through more than 529 of its own stores (branded Games Workshop® or Warhammer®), the www.games-workshop.com web store and independent retail channels in more than 50 countries worldwide. More information about Games Workshop and its other, related, brands and product ranges (including our publishing division ‘Black Library’ and our special resin miniatures studio ‘Forge World’) can be found at www.games-workshop.com. 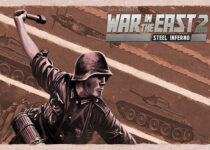